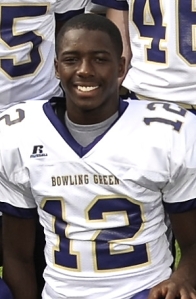 The recruiting circuit is still going strong for Bowling Green junior receiver Nacarius Fant, but he thinks this summer is when he could take it to the next level.

Fant has been visited by several coaches in the last two weeks, including a visit from Ohio State today.

Fant currently has offers from Western Kentucky and Illinois.

“Before, they focused on the run game, but with the new coaches, they’ve kind of changed that a little bit and are throwing it around,” Fant said.

On April 23, Fant got a visit from Kentucky offensive coordinator Neal Brown. The two talked again on Thursday, and Brown told Fant he’d like him to come to UK’s camp June 8 and compete against elite cornerbacks.

An offer could come out of that performance, Fant said.

“He said he likes my routes and thinks I run really good routes,” Fant said. “He wants to see what I can do one-on-one against those elite guys.”

Fant also got visits Thursday from Cincinnati, Louisville and Indiana, and from Purdue on Monday.

As of now, he’s planning to attend Louisville, Kentucky and Ohio State camps over the summer, he said.

“It’s really, really getting better this year,” Fant said of the Bowling Green area’s talent. “It’s going to be a great season for coaches to come to, and it’s nice to see people getting that interest. It’s special to be a part of the group getting these kinds of offers and looks, because not many people can say that.”